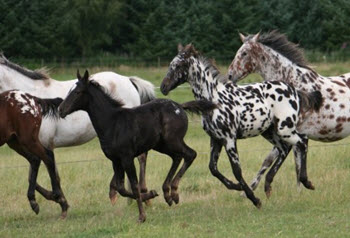 Compared to other horse breeds, the Appaloosa has an eight-fold greater risk of developing Equine Recurrent Uveitis (ERU).

The Appaloosa is also more likely to:

Within the breed, the individuals most at-risk seems to be the roan horses and horses with light-color coat patterns, especially the ones with sparse hair in the mane and tail and little pigment around the eyelids.

Equine Recurrent Uveitis (ERU) is an acute and non-granulomatous inflammation of the uveal tract of the horse’s eye. The uvea is the pigmented middle of the three concentric layers that the eye consists of.

During the acute state of the disease, the eye develops catarrhal conjunctivitis. It is common for the horse to experience eye pain, sensitivity to light, abnormal contraction or twitch of the eyelid, and increased tear production. In some cases, additional problems develop, such as oedema of the cornea and conjunctiva.

After the acute stage of the disease, it is not uncommon for the eye to be free of any clinical signs of inflammation for a prolonged period of time, sometimes several years.

The exact mechanism behind ERU remains unknown. Some research indicates that it might be an autoimmune disorder, where the body develops a hypersensitivity to one or more of the agents known to cause uveitis, such as bacteria, viruses and parasites.

How is ERU treated? 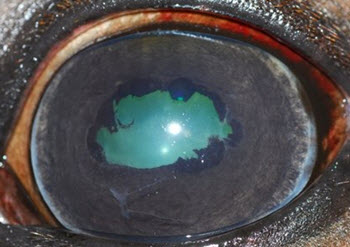 During the acute stage, the horse is given anti-inflammatory therapy – usually both topically (medicine is applied to the eye or eye region) and systemically (medicine is disperse throughout the body, e.g. through injections or medication that is eaten). One example of a commonly used topical medicine against ERU is prednisolone acetate. When it comes to systemic medication, flunixin meglimine is a common choice among veterinarians.

Pupillary constriction caused by ERU can be painful for the horse, and the veterinarian can prescribe atropine to help dilate the pupil.

During the calm periods between the acute attacks, no treatment is prescribed, because none is known to be effective. The veterinarian should be contacted immediately as soon as any symptoms of an acute attack appears again, even if symptoms are mild, because quick treatment of each new attack is important to prevent long-term damage to the eye.

When a horse goes through several episodes of eye inflammation within a fairly short time span, the risk of complications increases, e.g. the risk of developing cataracts, poor pupillary responses, clouding of the vitreous humour, and anterior or posterior synechiae.

ERU can lead to blindness, especially if each acute attack isn’t treated quickly and successfully. 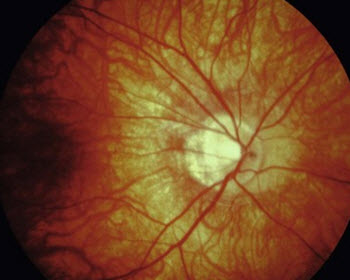 Appaloosas that are homozygous for the leopard-complex (LP) gene have an increased risk of Congenital Stationary Night Blindness (CSNB).

CSNB is an inherited disorder, present at birth. It does not progress over time.

The horse displays various symptoms connected to low-light situations. A horse can for instance be acting completely normal out in the sun, and then be very reluctant to enter a dimly-lit indoor arena, stable or trailer.

A gene to which leopard-complex has been localized is responsible for encoding a protein that channels calcium ions, a key factor in the transmission of nerve impulses from the eye to the brain. In one study on homozygous LP/LP horses, only factional percentages of the normal levels of this protein was found in the retina and the skin.

The ApHC recommends that Appaloosas that have certain American Quarter Horse bloodlines among their ancestors should be tested for a genetic condition known as Hyperkalemic Periodic Paralysis (HYPP). The disease causes seizures, which can be prevented with a medicine called acetazolamide.

For certain foals born after January 1, 2007, testing is mandatory and the result of the test must be noted on the registration papers.