The Noriker horse is a moderately heavy draught horse breed indigenous to the central Alpine region. It was called Pinzgauer horse in the past, and is still sometimes referred to as the Norico-Pinzgauer horse. 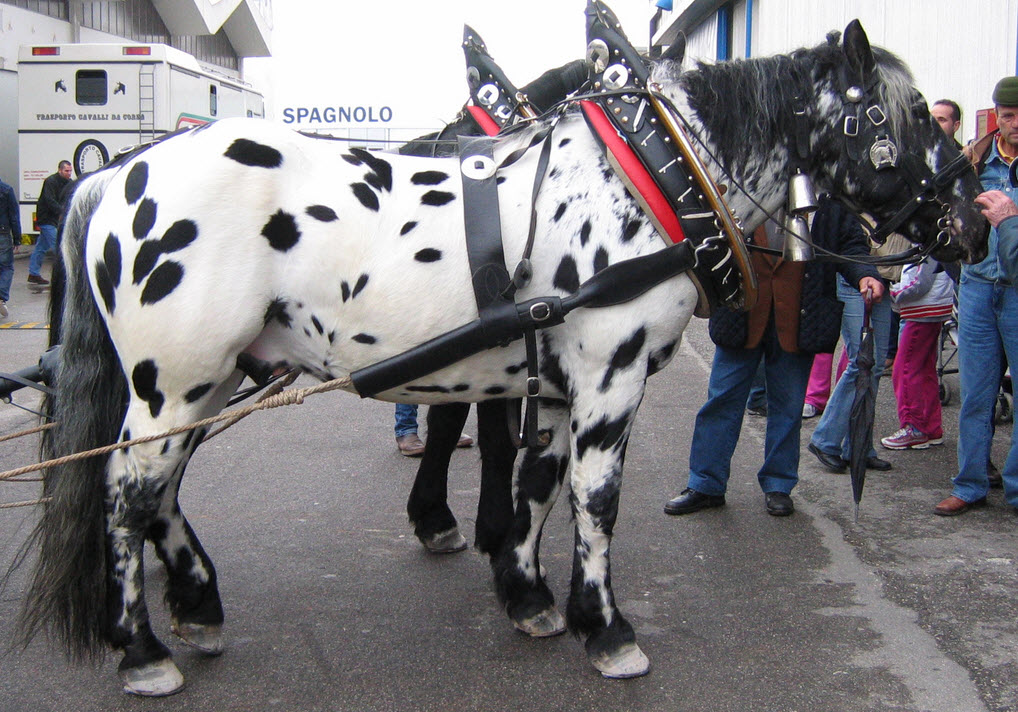 It comes in many different colour varieties. Beside the basic coat colours bay, black and chestnut, there are spotted leopard-complex individuals, Mohrenköpfe (blue roan), and other roan colours, tobianos and overos. The leopard spotted coat colour, known locally as Tiger, is still an active breeding objective.

The Noriker horse breed developed in the Alps as a reliable draft horse in these demanding conditions. It is strong and powerful, but also agile. It is sure-footed, with a low centre of gravity and a good sense of balance.

The Abtenauer was a smaller sub-type of the Noriker, hailing from the Abtenau area in Lammertal, south of Salzburg. It stood about 14.2-15.0 hands at the withers and was chiefly used to transport wood over steep terrain. The Abtenauer did not carry the leopard-spotting genetic complex.

The Abtenauer does not exist today, as it was absorbed into the main Noriker population.

In 1565, the stud farm Rif was founded in Salzburg and it came to have in indirect impact on the development of the Noriker breed, and is considered the reason why the Noriker contains so much Baroque horse genetic material. Neapolitan and Iberian stallions continued to contribute to the breed until the early 1800s. Today, we can see noticeable traces of this in the modern-day Noriker, e.g. the Roman head, the powerful and compact topline, and the long mane and tail. Baroque horses are also believed to be behind the prevalence of black Norikers and blue roan (“Mohrenkopf”) Norikers.

The Noriker horse is believed to have originated on the Grosslockner, the highest mountain in the Austrian Alps, where it was known as the Pinzgauer. Pinzgau is the older name for a region located within the federal state of Salzburg in Austria. It is today named Bezirk Zell am See.

This sturdy but agile draft horse of medium height was very important for transportation in the Alps, as it was powerful, deep-barreled ans sure-footed, with a low centre of gravity. As a draught horse, it transported salt, gold and iron from Salzburg to Italy, and brought wine and spices back. It was not until fairly recently, in the 20th century, that Pinzgauers became common in agriculture.

Once upon a time, Grosslockner was a part of the Roman province Noricum. In the late 1800s, the region went through a Romanophile period, and the name of this local horse that had, until then, been known as the Pinzgauer, was hanged to Noriker.

Closing of the studbook

The studbook for the Noriker was closed in 1903.

Norikers in the 20th century

The popularity of the Noriker in Austria peaked in the period between the first and second world war, but even after the end of WWII the Norikers kept being important in the Alps – especially in poor mountain villages where people could scarcely afford modern motorized transport and farm equipment.

In 1968, the total Noriker population consisted of slightly more than 34,500 individuals. In 1985, that number had dropped to below 7,000 individuals.

Since then, strong efforts have been made to save the breed.

Norikers in the 21st century

There are around 10,000 Noriker horses living in the countryside of Austria, and breeding and keeping Norikers has also became popular in parts of Italy, including the Puster Valley and the five Ladin Valleys which have strong historic ties to Austria.

The Pinzgauer High Mobility All-Terrain Vehicle is named after this horse.

There are five sire lines for the Noriker. The most popular one is the Vulkan, and more than half of all Noriker horses alive today are part of the Vulkan-line. The other four lines are Nero, Diamant, Schaunitz, and Elmar.

The Vulkan-line was founded by the brown stallion Vulkan 635, born in Pinzgau in 1887. He was a very good representative of the heavy draught-horse type needed for Alpine transportation in that era.

The Nero-line was founded by the stallion 554 liz. Nero, who just like Vulkan was a heavy draught horse.

The Diamant-line was founded by 367 Bravo 149, born in 1877. Yet, the line is not named Bravo, it is named Diamant after Bravo´s great-grandson 216 Diamant 496, born in 1903. The Diamant-line was fairly popular in the early 1900s, but during the second-half of the century the Nero-line surpassed it. Compared to Vulkan and Nero, Diamant-horses tend to be extra agile.

The Schaunitz-line was founded by the stallion Amor (born in Tirol in 1888) but named after his son 255 Schaunitz (born in 1896). The Schaunitz-line Norikers were known not only for their durable constitution but also for their lively temperament, and they could be difficult to handle at times. In the 1980s, this line largely fell out of favour among Noriker breeders, but there has been a bit of a resurgence in the 21st century. Schauniz-line Norikers are typically on the smaller side and have very good movement.

The Elmar-line was founded in 1896 by the stallion 80 Arnulf 55. These Norikers are of a smaller size and lighter build, and the line is famous for being mostly leopard-spotted. It is a small sire line, but highly sought after by breeders who love the leopard-complex.